Now that the urban luxury-apartment boom is winding down, some big investors are fanning out to the suburbs. As institutional investors such as pension funds and insurance companies hunt for higher yields, they have been scouring the older and less glamorous suburban rental buildings that ring metropolitan central business districts, real-estate executives and analysts said. Part of the reason: Swelling supplies of new luxury apartments in urban areas are driving rents lower for high-end city apartments.

“About two years ago was the inflection point where we began to see the impact of having a lot of new product in the urban areas, and we also began to see the beginning of some softness,” said Jeanette Rice, Americas head of multifamily research at CBRE Group Inc. CBG -1.88% “We also saw vacancy rates inch up, so institutional capital is always thinking, ‘Where are the better returns?’”

Garden apartments, usually clusters of low-rise buildings typically in the suburbs with middle-class rents, have outperformed the high-rise apartment sector in the past year, according to a report from TH Real Estate, an affiliate of Nuveen, the investment-management arm of TIAA. Returns for garden-style apartments averaged 8% for the four quarters ended in June, compared with 5.1% for high-rise apartments, the report said. 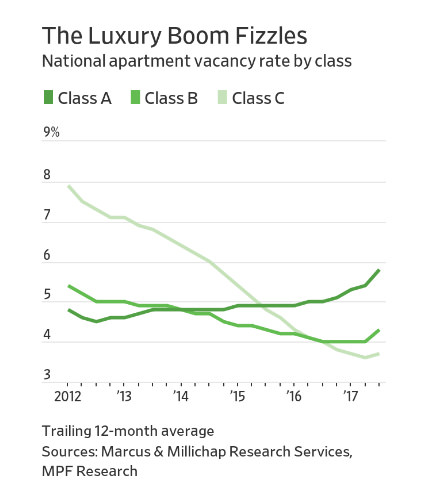 Other factors driving the appeal of the older suburban apartment sector, typically called class B, include high occupancy rates and a high and constant demand from the population renting out of necessity.

In the third quarter, the vacancy rate for upper-tier apartments in the so-called class A category was 5.8%, while the rate for class B apartments was 4.3%, according to Marcus & Millichap Research Services and MPF Research. The suburban rental market targeting middle-income residents also is bolstered by a homeownership rate that has remained well below the 69% recorded at the height of the housing bubble a decade ago.

With apartment development still tough in suburban municipalities, the supply of new apartments that eventually could fall into the class B category in metropolitan areas has been limited—another plus, real-estate executives said.

“In the suburbs you didn’t have a robust pipeline because investors’ and developers’ focus had been primarily on the downtown market in major cities and because in the suburbs is where everyone took a bath and got hurt during the credit crisis,” said Jeffery Daniels, senior vice president at Institutional Property Advisors. “Now there’s a huge appetite for class B multifamily because investors get better risk-adjusted returns than [they do] building a brand new asset.”

While local and regional private companies still dominate the suburban class B apartment sector, some bigger investors are joining with established operators to buy older apartment buildings and renovate them, so they can raise rents while still keeping them significantly lower than levels commanded by the upper end of the market.

Some institutional investors such as TH Real Estate, have long had funds targeting this type of apartment-rental category which has had a steady performance in areas surrounding prime cities such as Los Angeles, New York and Boston, as well as markets such as Minneapolis, Nashville and Austin, Texas, said James Martha, a managing director and head of TH Real Estate’s U.S. multifamily division. “Their demand just stays constant, and rent growth is predictable,” Mr. Martha said. “You don’t have big highs, and the downside is limited.”

“Coming out of the crisis, we were buying a lot of class A [properties] as well,” said Bob O’Rourke, head of real-estate investments for Guardian Life. “But as the cycle continued, we saw class B becoming more attractive as we saw valuations and costs getting very high on buildings in urban centers.”

TruAmerica’s strategy is to buy large apartment complexes 15 years old or older that need renovation and are within a 15-to-20-mile radius of major central business districts. The company makes upgrades to the individual units—in some cases spending as much as $10,000 each—and adds or improves amenities including fitness centers and clubhouses, allowing for higher rents that still attract a population segment renting out of necessity. “There has been tremendous increased competition,” Mr. Hart said. “We have had a lot of entrants into this market.”

The appeal of the strategy has been the ability to raise income from rents, creating a “durable cash flow” and the appreciation in the property’s value, Mr. Hart said. Last year, TruAmerica was able to sell a complex in Renton, Wash., with about 400 apartments for about $98 million—$36 million more than the company paid for the property about three years ago, according to public documents.